Museum Tinguely AHOY! is flanked by a wide-ranging, high-calibre performance programme. This will include three different performances, for which Museum Tinguely itself will be the guest of local partner institutions. Three performance artists of international renown, Nevin Aladağ (D), Keren Cytter (IS) and Marie-Caroline Hominal (CH) are each preparing a new piece especially for this project. Rooted in different fields ranging from music to theatre and dance, their works will showcase an array of different performance approaches. In this respect, their work will recall the many-facetted performance practices of Jean Tinguely himself, as well as the blending of art and life that he so famously aspired to. 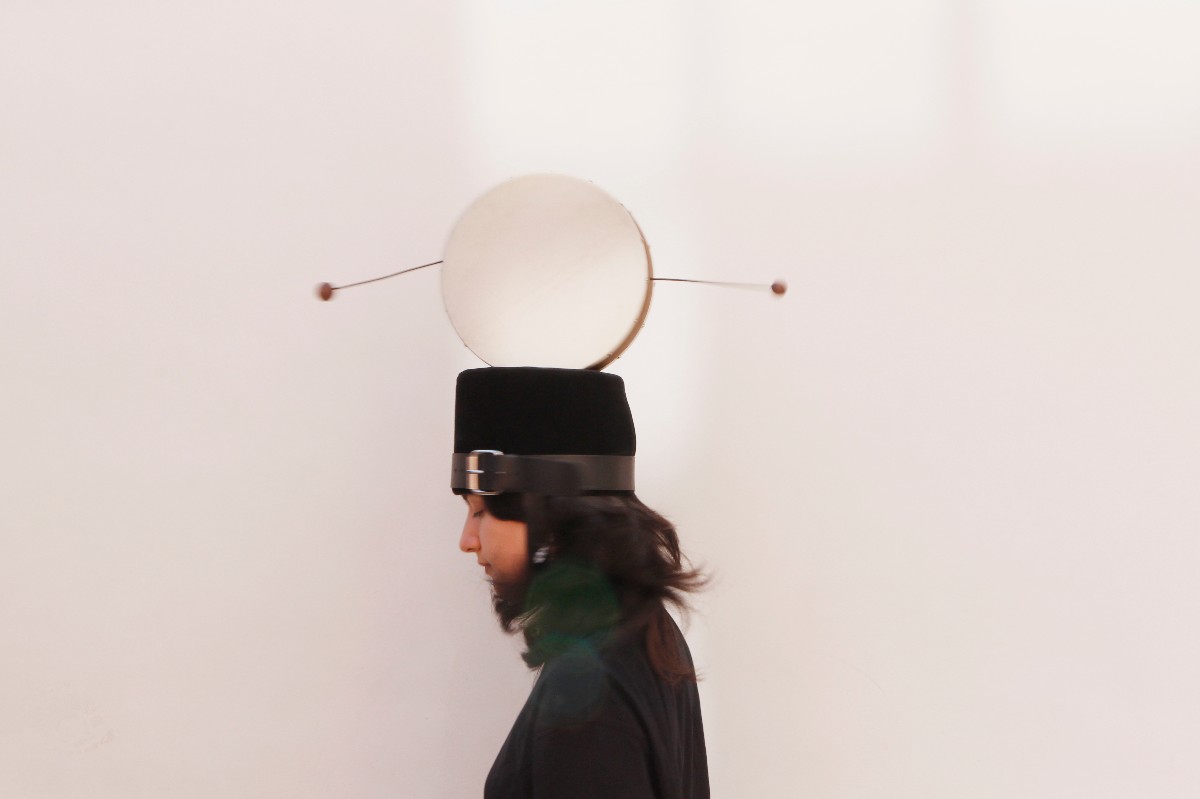 In the performance Body Instruments (2021), Nevin Aladağ continues her interest in instrumental interventions. A performer wears specially produced musical instruments on their body as they move through the urban realm. The instruments – two accordions, bells and a percussion instrument, which is worn on the head – are played as a result of the motion of the body. Even basic movements such as walking, turning the head or raising and lowering the arms produce musical sounds. Thus enhanced, the body itself becomes an instrument. And movement and the creation of sound become inseparable.

On the one hand, the work refers to such art-historical traditions as the modern avant-garde and Oskar Schlemmer’s Das Triadische Ballett (1919–1922), whose playful approach to geometrical forms in connection with dance and performance was first discovered by the artist in the Staatsgalerie Stuttgart during her time as a student. The references to performance in the 1970s are equally important. Certain aspects of Aladağ’s work, in particular the accordions, which fold out in a manner reminiscent of wings, and the rainmaker’s hat, which demands a sense of equilibrium and a mastery of the body, allude to Rebecca Horn’s body instruments (e.g. Weisser Körperfächer, Balancestab, both 1972). The questions addressed by Horn’s works vis-à-vis the relationship between bodies and movement and the potential of sculptural extensions to the body are followed up by Body Instruments, particularly in terms of sound.

Body Instruments owes its topicality and conciseness to the fact that Aladağ applies these art-historical approaches and formal languages, while simultaneously interweaving them with levels of historical and social meaning. For example, the work refers to the richly diverse tradition of making music in public, which stretches from the wearing of bells by medieval jesters and fairy tales involving ratcatchers, via sacred and profane processional customs to modern street music. And the figure of the busker also invokes questions of social status and of how society negotiates the use of the public realm. With its bells, accordions and two different forms of drum, the performance combines instruments drawn from a range of temporal and spatial contexts. The common factor shared by these instruments is that they are all found beyond the confines of western classical music. Played together, they thus create a piece of experimental music that achieves a balance between the essential sounds generated by actions such as walking and the more poetic ones that result from consciously chosen movements.

Body Instruments interprets the classical and folk instruments on the body of the musician in a wilful manner that is perpetually in motion and never quiet.

About the artist
The artist Nevin Aladağ (*1972), who has been living in Berlin since 2002, uses sculpture, video and photography in her work. She creates performances and sculptural installations in museums and public spaces. Aladağ grew up in Stuttgart. She studied sculpture with Olaf Metzel at the Academy of Fine Arts, Munich between 1993 and 2000.

Her works have recently been seen in solo exhibitions in such locations as the Lehmbruck Museum Duisburg (2021), the Museum of Modern Art San Francisco (2020) and the Hayward Gallery, London (2020). Aladağ’s work received particular attention as a result of her participation in documenta 14 in Athens and Kassel and the 57th Venice Biennale in 2017. She was awarded the Ernst Rietschel Art Prize for Sculpture in Dresden in the same year 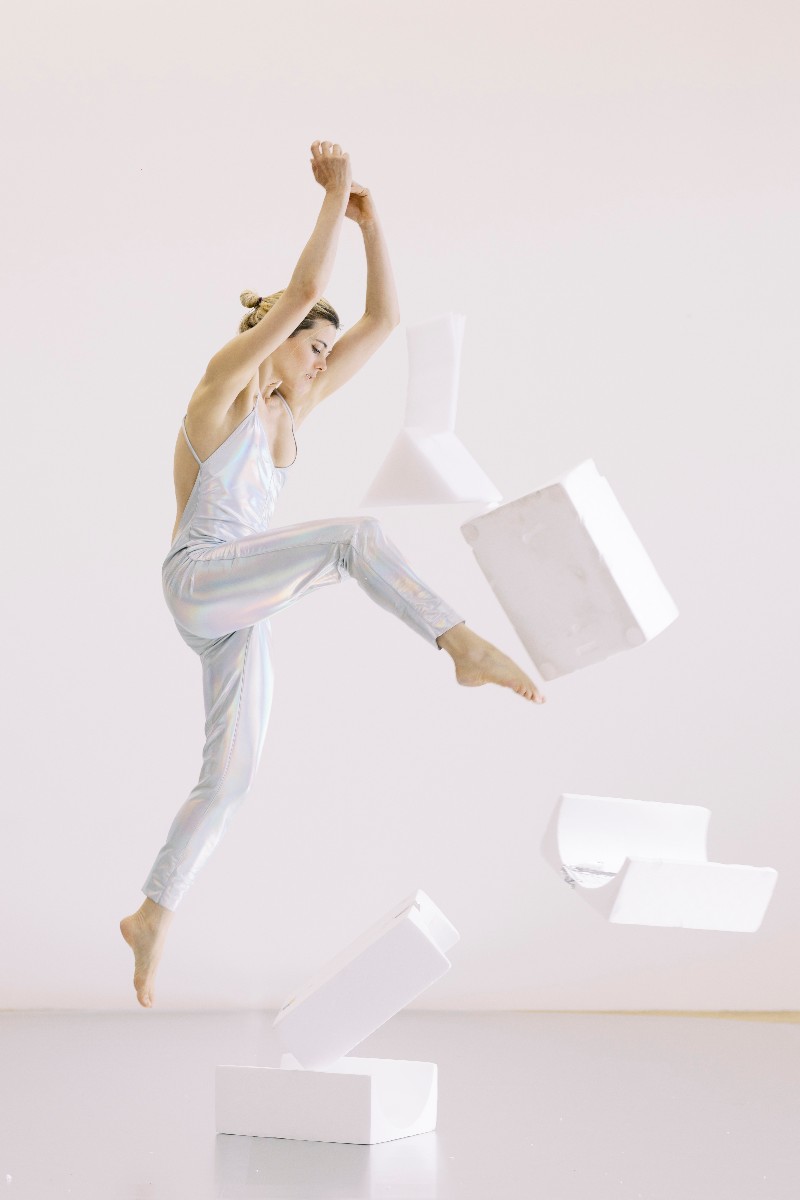 In her works, Marie-Caroline Hominal often embodies animals or fictional figures that she borrows from cultural traditions as well as from pop culture and the world of cartoons. Her new piece, which she has developed for the performance programme of Museum Tinguely AHOY! is a solo that she dances herself. A circular surface forms the stage – one could say the ring –, in which Hominal slips into a number of roles, one after the other.

The piece with the eloquent and, at the same time,  knowing title, Eurêka, c'est presque le titre (2021), begins with the retelling of a dream, in which she plays chess with John Cage. The inspiration for this also comes from the biography of Jean Tinguely. She speaks of Cardi B or Lewis Hamilton as contemporary equivalents of Niki de Saint-Phalle or the Swiss racing driver Jo Siffert. The dance-like game with abstract forms is accompanied by depictions of characters, which include a female figure – somewhere between a witch and a Mexican La Catrina, a tiger and an indefinable, shimmeringly hairy creature that oscillates between object and living being. And, all the time, Hominal brings these fabulous and fantasy figures up to date with the help of gestures and a repertoire of movements taken from everyday and pop culture.

Movement and circularity as prerequisites for our existence that are symbolically present as the sun and the moon – the latter evoked by the round, silvery dance floor – underlie the presented cycle. Body, sculpture and celestial bodies unite in dance and movement. The eternal and permanent, as represented by these heavenly objects, combine with the here-and-now, the contemporary spectacle, to form a machine infernale.

During the course of the performance, the artist appears with a range of objets trouvés. As the spectacle continues these begin, as if by chance, to form an installative assemblage. And the term assemblage can also be used to describe the conception of the piece itself: The sequences that Hominal herself labels as numbers successively fit together to form a colourful and harmonious overview of a moving and tragicomic imaginary world: a cosmic circus between show-business and avant-garde art.

The first gesture, whether a movement, a trait or a construction, is always the beginning of a story.

About the artist
The Franco-Swiss artist Marie-Caroline Hominal (*1978) works and lives in Geneva. Her artistic practice includes dance, choreography, video, text, drawing, sculpture and radio. Following her training at the Zurich Dance Academy at the ZHDK and the Rambert School of Ballet and Contemporary Dance in London, Hominal danced with, amongst others, Gisèle Vienne, Gilles Jobin, La Ribot and Marco Berrettini as well as at the Tanztheater Basel. Since 2002, the artist has realised her own works and toured the world with pieces that she performs in theatres, museums and galleries. In 2019, Hominal was awarded the Swiss Dance Award for «Outstanding Female Dancer». 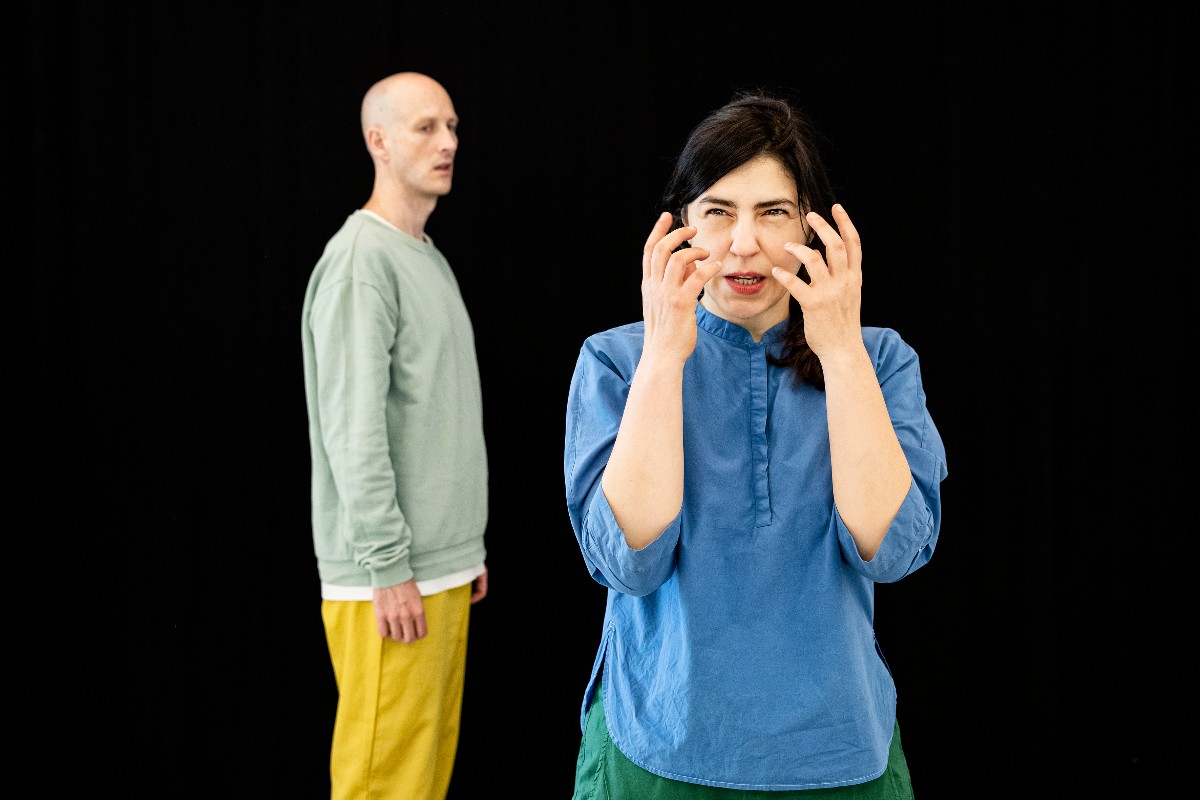 Keren Cytter, The Lady of the Lake, 2021 © The artist; photo: Gianmarco Bresadola

The Lady of the Lake
by Keren Cytter

Keren Cytter’s stories pick up on social alienation and the banalities and horrors of everyday life, especially those generated by intrapersonal relationships. The Lady of the Lake (2021) is a theatrical piece that Cytter has written for Museum Tinguely AHOY! It involves a dialogue, which isn’t a dialogue, and which is performed by the actors Fernanda Farah and Damian Rebgetz.

The piece combines storytelling, song, dance and stand-up comedy. It is also partly inspired by the biographies of the actors. The two figures address the audience in monologues, recalling formative events and the evolution of their life stories: These include tales of belonging to a rowing club during childhood – «Can you imagine how it feels to be in a club you don’t want to be in, doing a sport you didn’t know even existed? It’s called childhood, I know» – or of five husbands, from wine grower, perfumer, jazz musician and paediatrician to journalist. In the process, the monologues continue like lines, sometimes crossing and sometimes running in parallel. The actors interrupt each other and jostle disruptively, centre stage. Every now and again there is a brief dialogue between the two, which immediately, however, disintegrates back into separate narratives.

The penetratingly sharp and sometimes absurdly comic text meanders, guided by contentual and phonetic associations as well as by the movements of the actors. Again and again, one comments upon the narrative or picks up on the gestures of the other with their own gesture, like a «physical echo». This structure is held together by two constantly repeating elements – a rowing movement and a swing of the arm accompanied by an «ahoy!» – and the pentagram traced out on the floor that guides the movements of the actors in the space: a backwards and forwards within the closed figure of the circle. The piece appears to break the rules of the game – and self-reflectively comments upon its own medium – by offering observations on theatrical elements or even performance art, «more elegant, more intelligent ... than theatre».

The artist has interlaced the text with her own pithy metaphors and precise analyses of contemporary society. With dry humour and, at the same time, a sense of pain, Cytter’s piece offers us a glimpse of the singularised and performative social context of today.

I tried to make a performance that will include as many theatrical elements as possible and be about nothing.

About the artist
Keren Cytter (*1977) studied at the Avni Institute for Art in Tel Aviv between 1997 and 1999 and, as the holder of a scholarship, at De Ateliers Art in Amsterdam between 2002 and 2004. She was based in Berlin between 2005 and 2012, since when she has lived and worked in New York. The artist is well known for her video works, theatrical pieces and drawings. In 2012, she founded the D.I.E NOW (Dance International Europe Now) dance company. She has also written five novels and three children’s books.

The works of the artist have been displayed in, amongst other places, the Kunstmuseum Winterthur (2020), Center for Contemporary Art, Tel Aviv (2019), Museion Bolzano (2019), Museum of Contemporary Art Chicago (2015) and the Kunsthal Charlottenborg, Copenhagen (2014). In 2021, Keren Cytter was awarded the Guggenheim Fellowship.