Michael Landy. Out of Order

In summer 2016, Museum Tinguely Basel is pleased to present the first museum survey of acclaimed British artist Michael Landy.The exhibition will span Landy’s entire career, bringing together works from Break Down 2001, where the artist systematically destroyed all of his possessions in a former department store in London, through to Credit Card Destroying Machine 2010, Saints Alive 2010-13, among many others. 'Michael Landy. Out of Order' will present monumental sculptures, works on paper and interactive art works in one vast environment where works from three decades appear in dialogue and which can be “explored on a walk, like in an English landscape” (M. Landy). Many of the works are intrinsically linked to the aesthetics and the socio-political conditions that have shaped the artist’s life in Britain.  The exhibition hopes to offer an opportunity for the audience, to contemplate the impact of consumer culture on society, by raising important questions about how these systems work. ‘Out of Order’ will consider our daily confrontation with consumer culture, politics and events that move us, it is steeped in language and symbols that permeate life in Britain. On the occasion of the finissage, Sunday 25 September, Museum Tinguely celebrates its 20th anniversary with an “Out of Order Day” at the museum and Solitude Park. 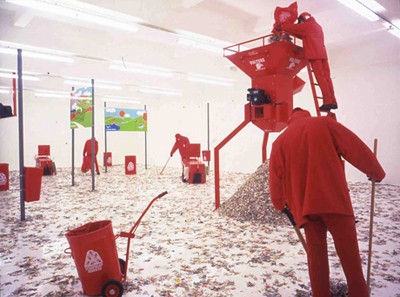 A graduate from Goldsmiths College and a key member of the “Young British Artists” (YBAs) generation that emerged in London in the 1990s and shaped artistic development with shock tactics, the use of refuse, the staging of wild living, and a simultaneously oppositional and entrepreneurial attitude, Landy has garnered international recognition for his versatile practice, which explores notions of capitalism, creation and destruction.

Right at the beginning of his career Landy succeeded in finding a form for an abstractum such as the consumer world with the installation Market (1990). By showing empty market booths, by furnishing a large hall with tiered, artificial lawn-covered booths that lacked one essential thing –goods– he moved precisely these latter into the focus of interest. Market 1990, which was originally conceived in the vast disused Building One in East London, will appear throughout the exhibition. This assembly of market stalls, artificial turf and plastic crates adapts the sort of objects and visual display merchandising techniques of London’s local markets and corner shops. Other highlights will include: Credit Card Destroying Machine 2010, which invites the audience to dispose of their credit card in exchange for a drawing as well as Saints Alive 2010-2013 a series of mechanical, kinetic sculptures of saints that are constructed entirely from found materials. The exhibition will also feature the artist’s most recent body of work, Breaking News 2015, where hundreds of red and white drawings pick out various slogans and familiar sayings that give the viewer a feeling similar to reminiscing or glancing through newspaper headlines. 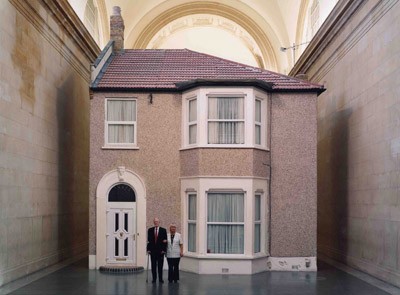 Jean Tinguely has been a guiding artistic figure for Michael Landy ever since he saw a Tate exhibition of the swiss sculptor as a twenty year old student. Tinguely’s infamous work Homage to New York 1960 resonated in particular with Landy. This work consisted of a site-specific, sculptural-performance for the garden of MoMA designed to self-destruct in front of its audience. In reaction to Tinguely’s oeuvre, Landy created a major installation Break Down, 2001 in a former C&A store on Oxford Street. There Landy alongside a team of workers, successfully destroyed 7,227 items within his possession including his SAAB 900, birth certificate and works of art. Each item was placed on a mechanical conveyor belt and shredded. After fourteen days of destruction, the artist was left with nothing. For this exhibition, a vast memorial to the work will list every item destroyed.

Many of the works in the exhibition reflect the environment in which they were conceived, intrinsically linked to the aesthetics and the socio-political conditions that have shaped the artist’s life in Britain. For example, Scrapheap Services 1996 will be displayed for which Landy created a fictional cleaning company to clear the east end's Chisenhale Gallery of thousands of cut-out figures covering the floor. Landy spent two years gathering remnants of consumer goods and products cutting each item into human figures. Mannequins dressed in a red uniform sweep them up like leaves. These figures can be interpreted as a critique of society and the minority groups that were often pushed aside and discarded.

As a talented draftsman, Landy often refers to drawing when meticulously documenting the world around him. In this exhibition, there will be two significant series on paper. Nourishment 2002 will be shown, a suite of thirty-one etchings that are detailed still-lives of plants in a decaying state. The artist would draw them as he brought them to his studio documenting their demise. Another important series included will be Welcome To My World, 2004 - a very personal and intimate series of drawings and photographs of the artist’s father, John Landy, who worked as a miner, until an industrial accident in the late 1970s. Often emotionally-charged depictions of his relationship with his father, these drawings become fragments documenting the intimate life of John Landy. Another significant project in the exhibition will be records of Semi-Detached 2004 a life size replica of Landy’s parent’s home in Essex created for Tate Britain, which has become a symbolic archetype of the working class home in Britain and a metaphor for Landy’s relationship with his father. 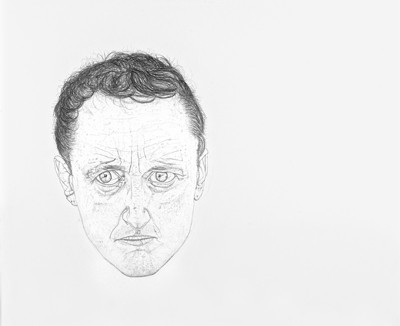 ‘Out of Order’ will reflect on our daily confrontation with consumer culture, politics and events that move us, it is steeped in language and symbols that permeate life in Britain. The exhibition hopes to offer an opportunity for the audience to consider the impact of consumer culture on society, by raising important questions about how these systems work and by encouraging the viewers to celebrate the act of destruction.

Michael Landy was born in 1963 in London, where he continues to live and work. He studied at Goldsmiths and while there he exhibited in the now historic “Freeze” exhibition. He grew up in the Great Britain of Margaret Thatcher, in a torn society characterized by social conflicts, large-scale unemployment, deindustrialization and, associated with this, massive upheavals in the work world. Hackney in East London, his parents’ place of residence at the time, is a traditionally working-class borough that was strongly affected by the politics of the ‘Iron Lady’ and her successor John Major. Throughout his practice the artist has created epic installations and performances to explore political and social issues. His 2001 monumental commission for Artangel, Break Down, was a systematic destruction of all of the artist’s possessions in a former department store in London. Recent solo exhibitions include Saints Alive, originally at the National Gallery, London and then travelled to Antiguo Colegio de San Ildefonso, Mexico City in 2014. Landy was elected as a Royal Academician in May 2008. Michael Landy’s works are held in many public institutions including the Tate Collection, London; the Arts Council England; and the Museum of Modern Art, New York.

Museum Tinguely is showing almost all work groups that have been created since 1990, in full or with selected works. It is a show that is being set up by the artist with the Museum’s curators and that presents a strong chapter of art of our times.

A catalog in German and English is to be published at Kehrer Verlag, containing contributions by Douglas Fogle, Andres Pardey, Stefan Zweifel, as well as a conversation between Michael Landy and Catherine Lampert and a preface by Roland Wetzel, 240 pages, available at the Museum shop and in bookstores: 48 CHF, English edition ISBN 978-3868287172, German Edition ISBN 978-3868287165

Save the date: Out of Order Day - 20 years of Museum Tinguely! 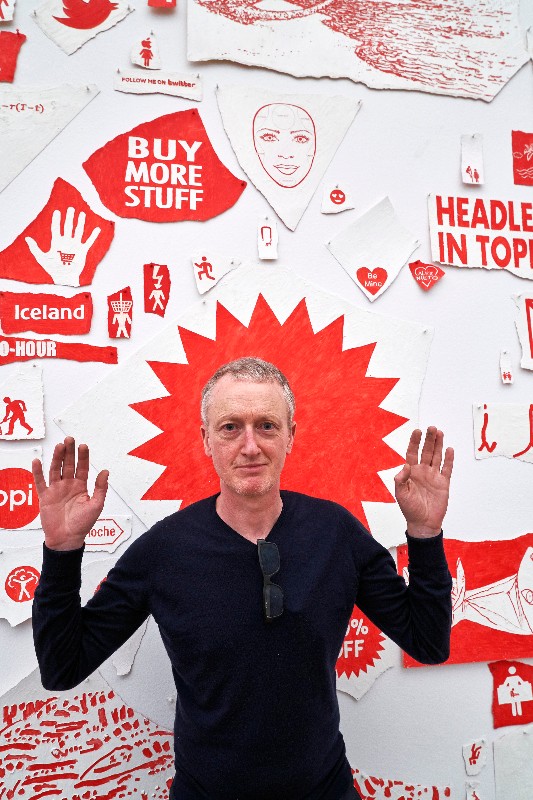 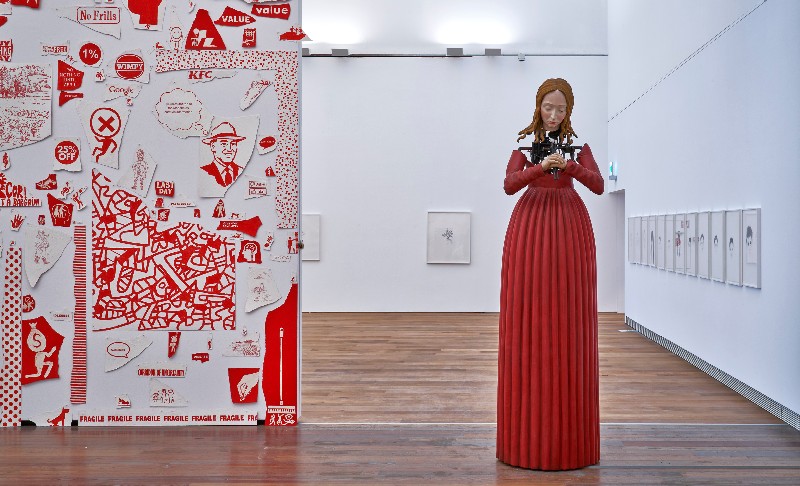 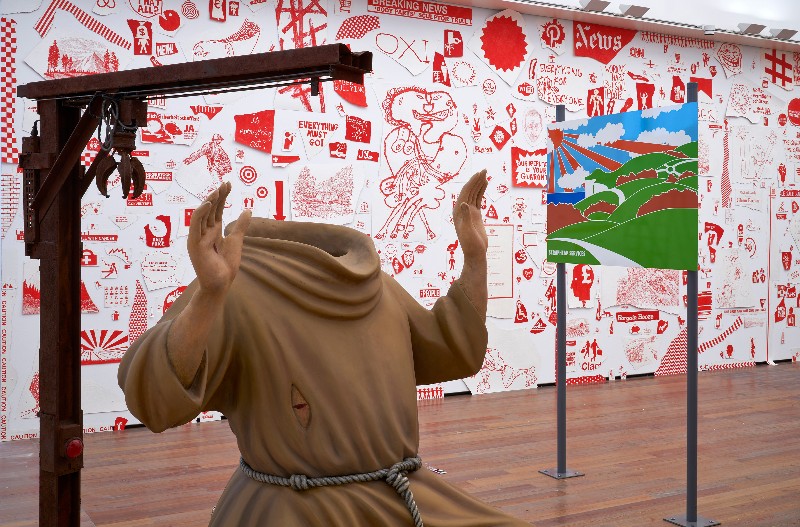 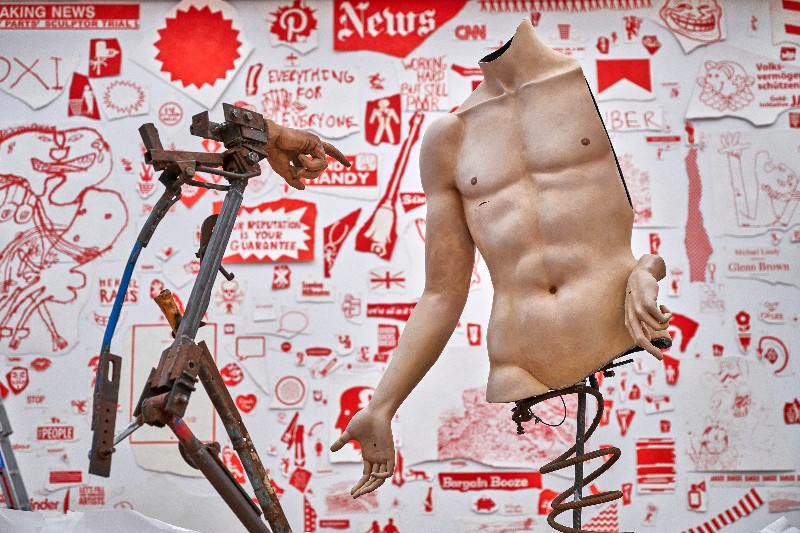 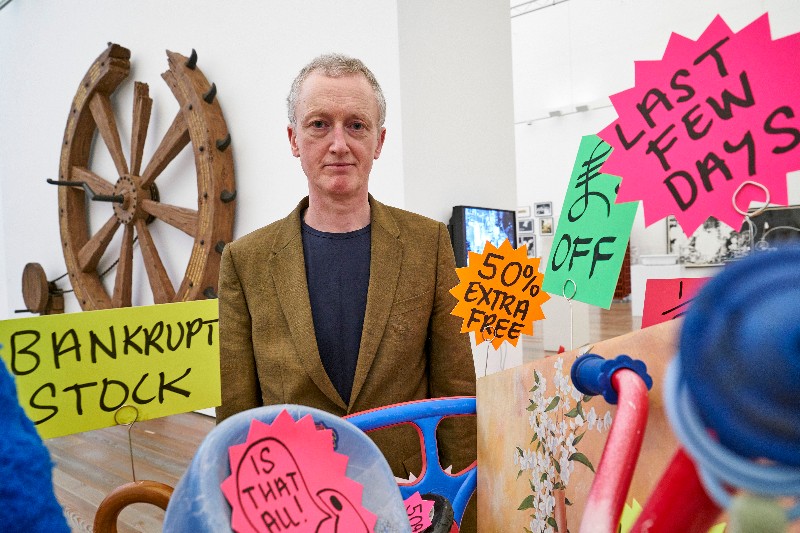 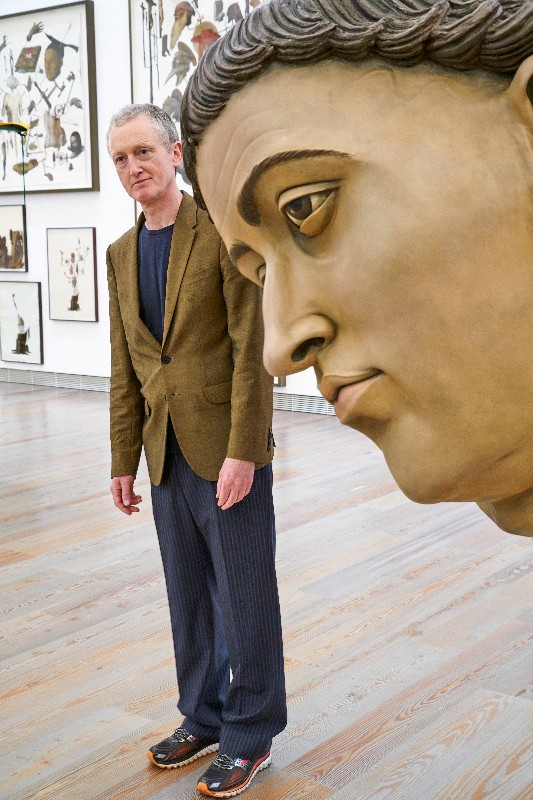 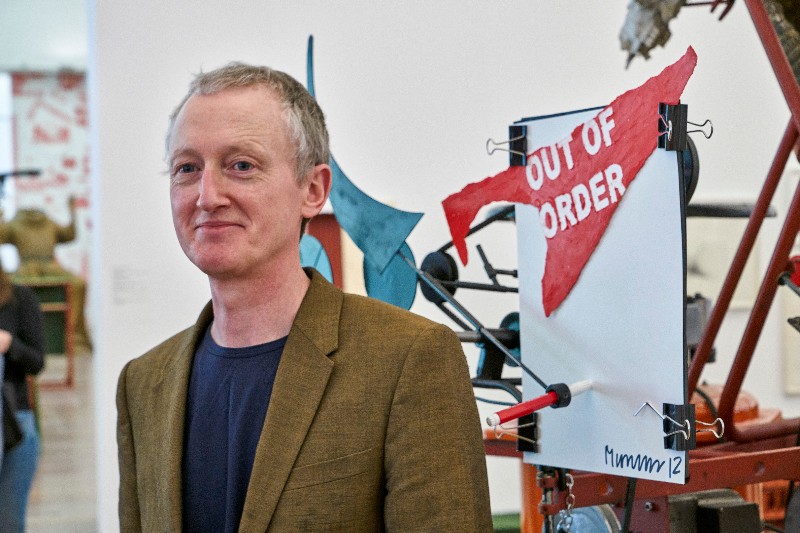 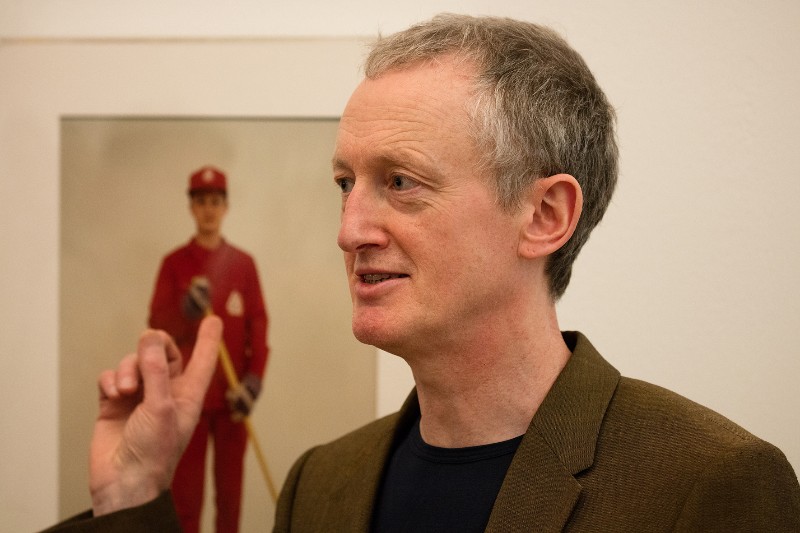 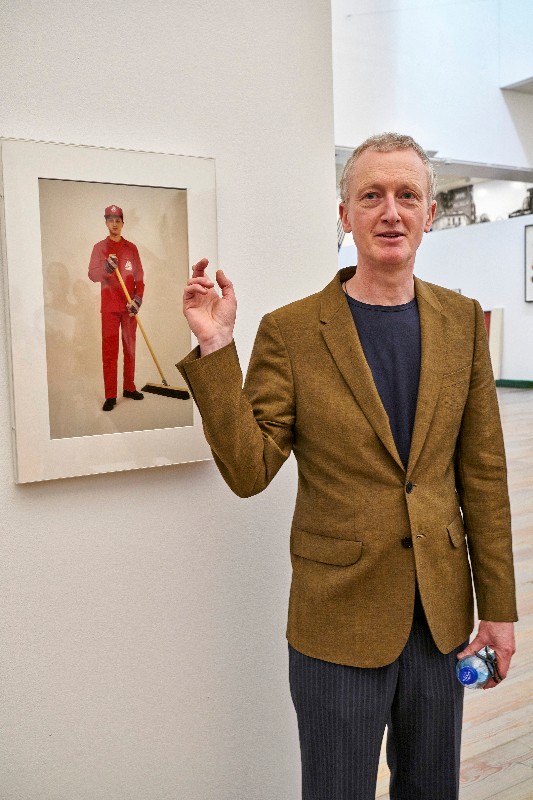 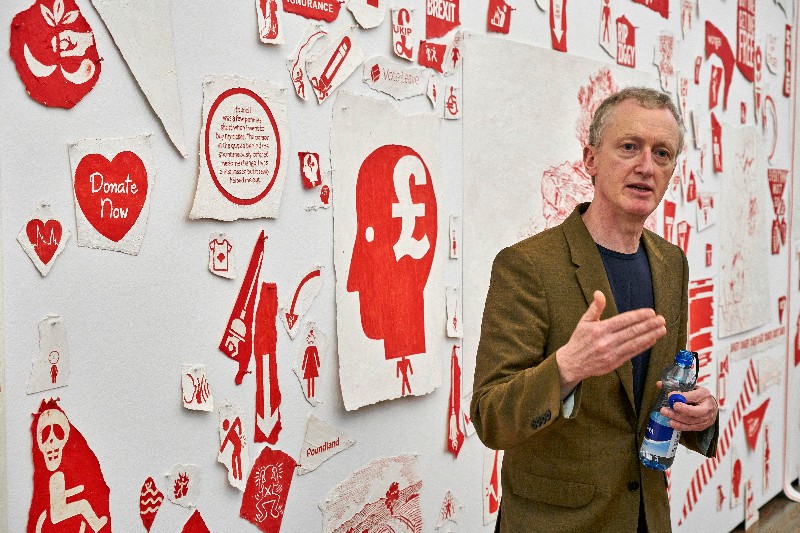 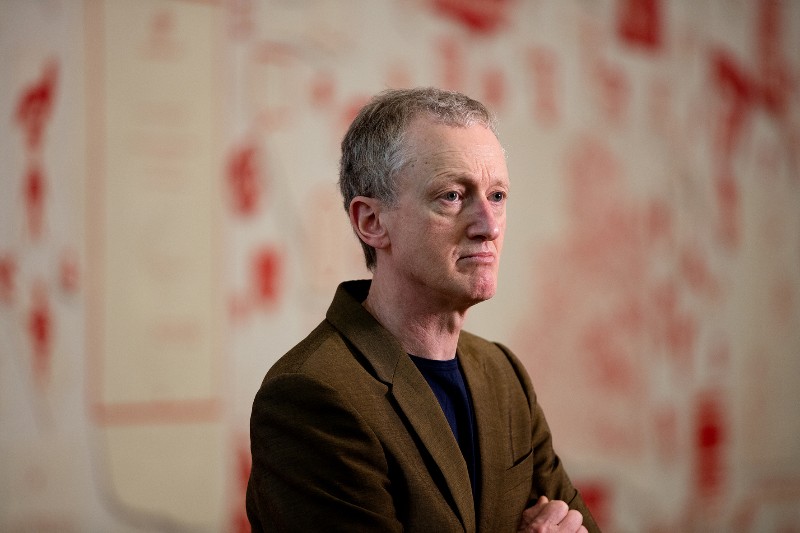 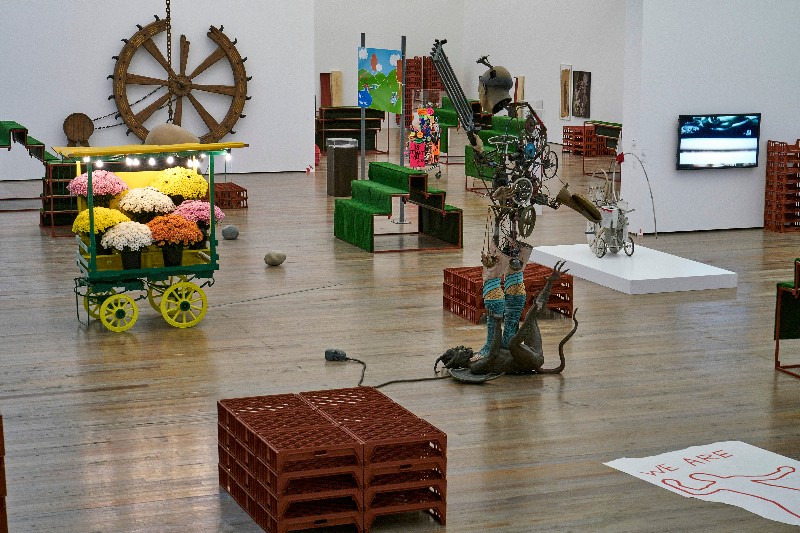 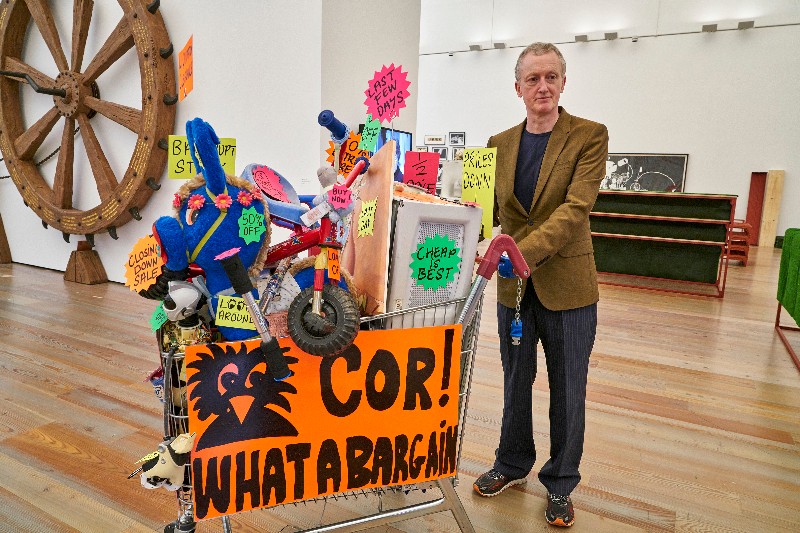 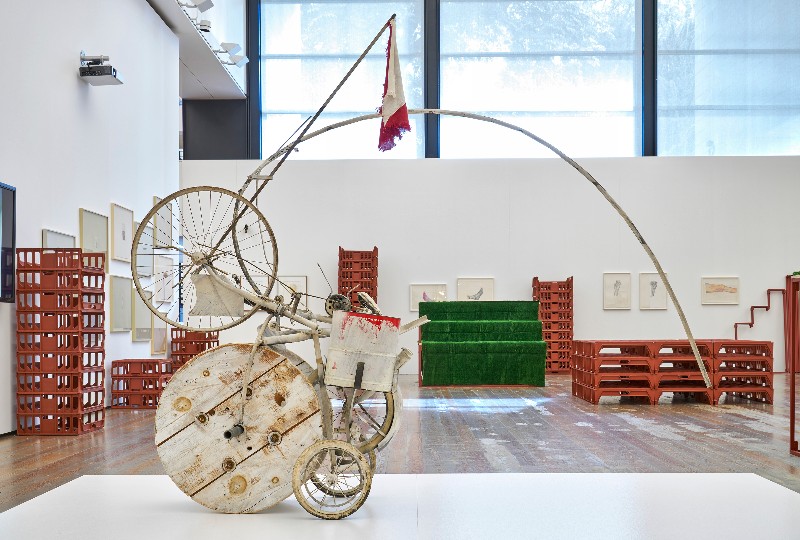 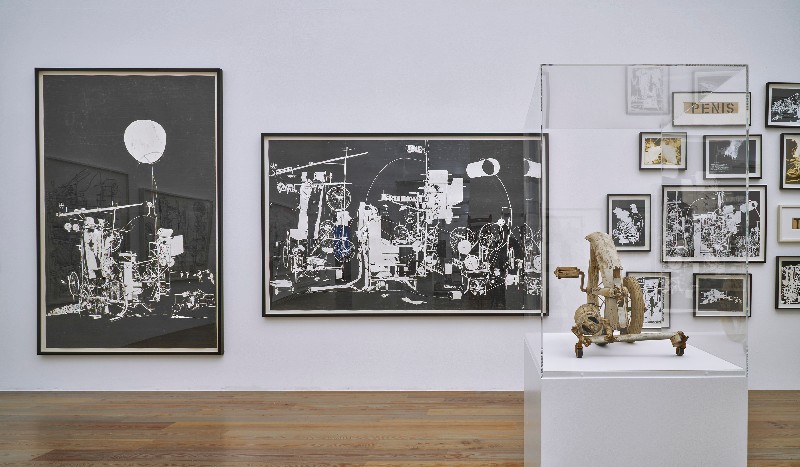 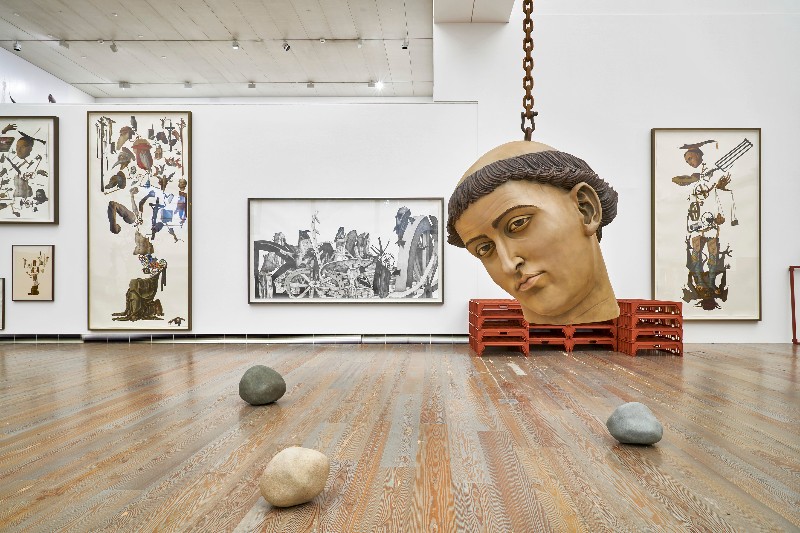 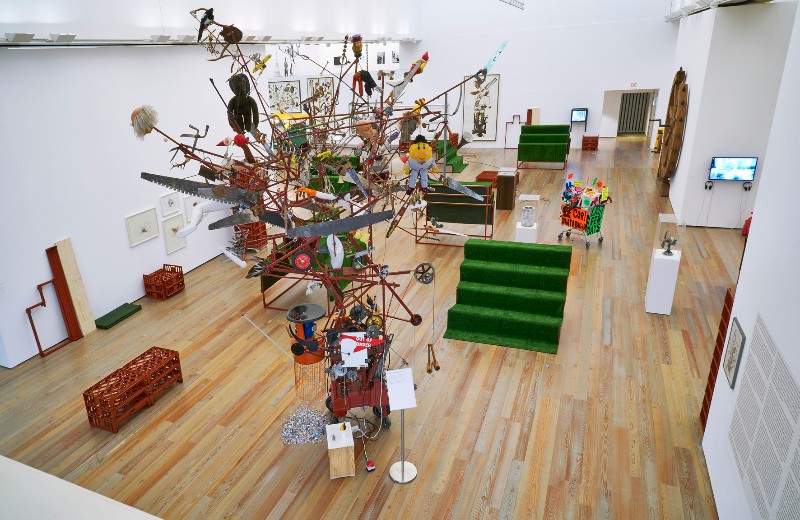 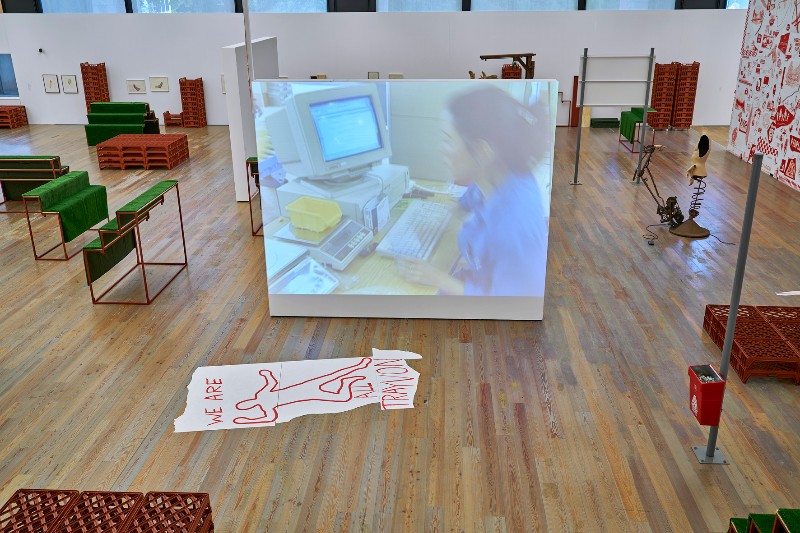 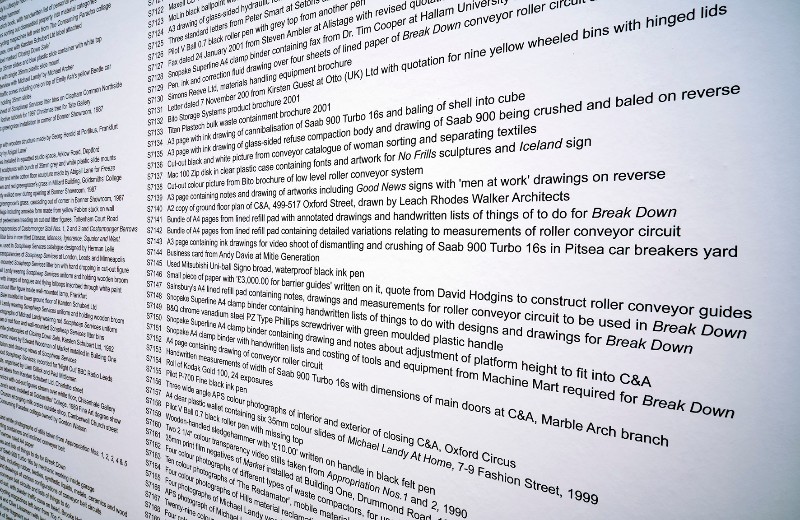 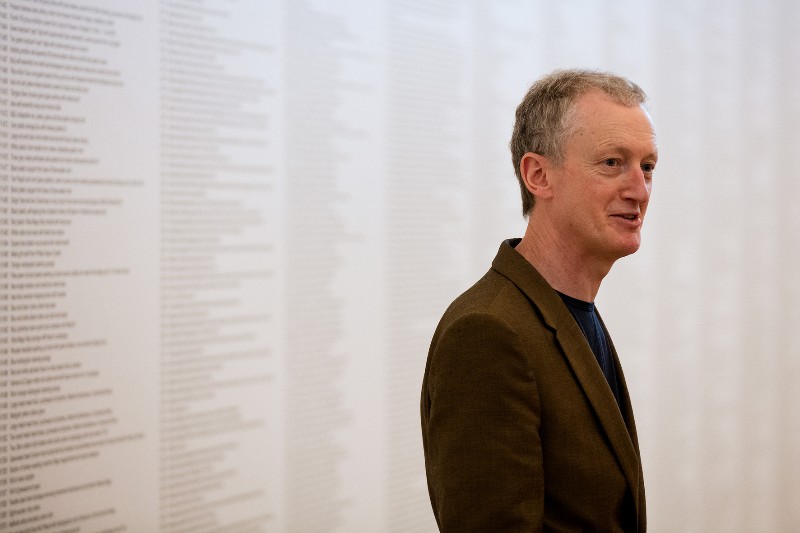 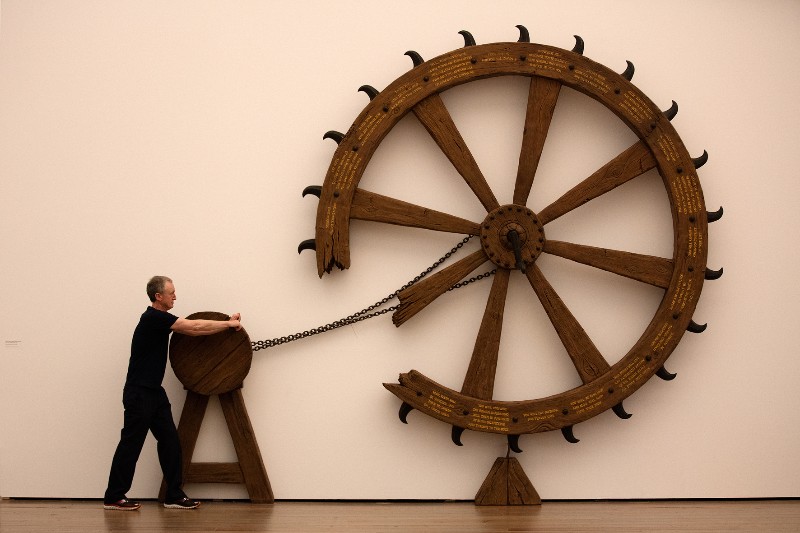 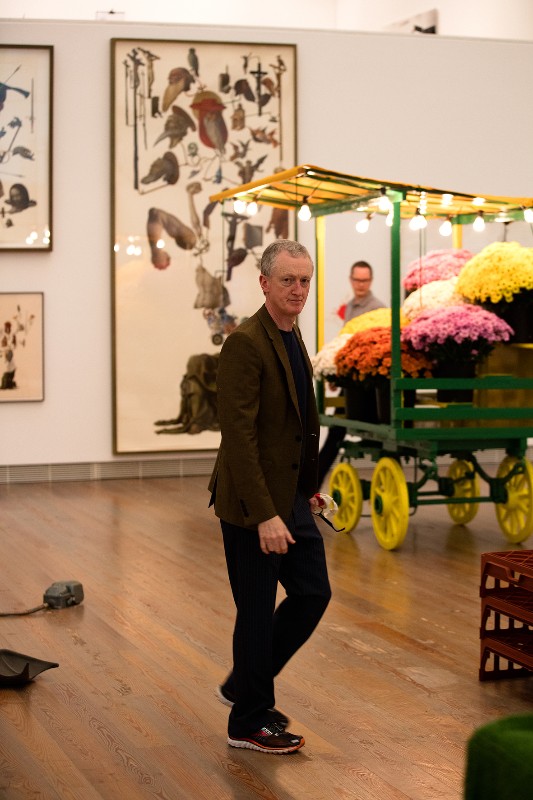 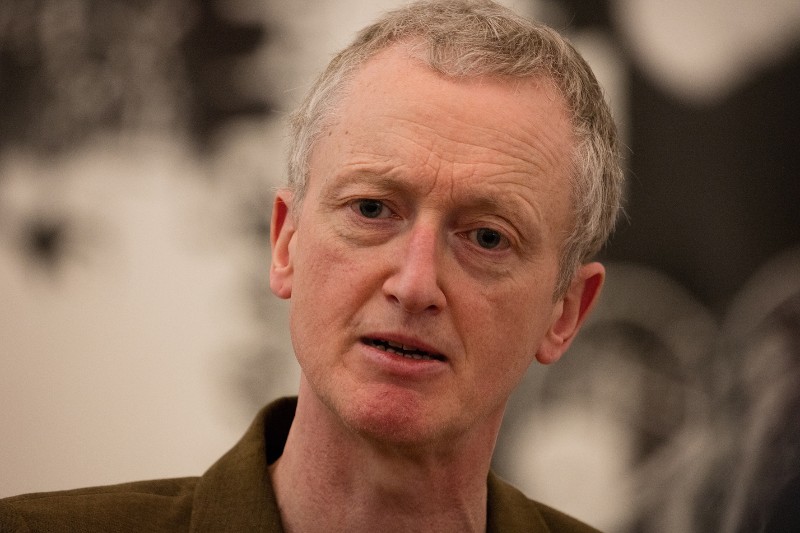 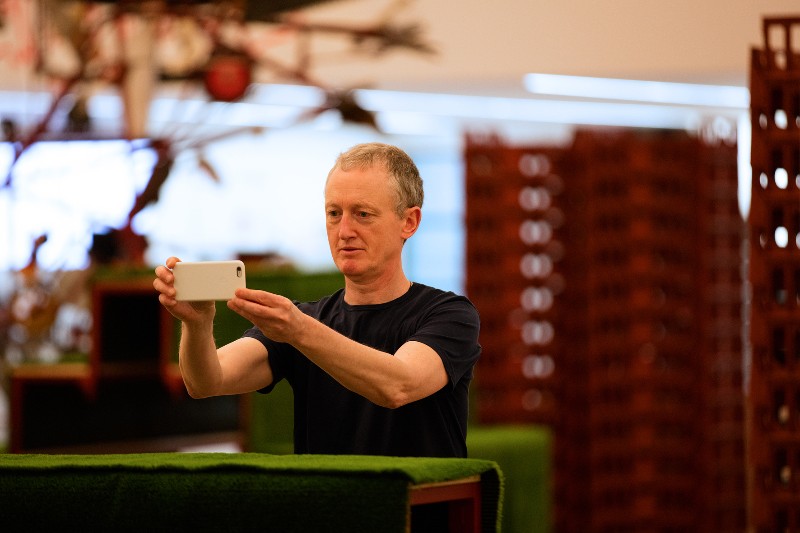 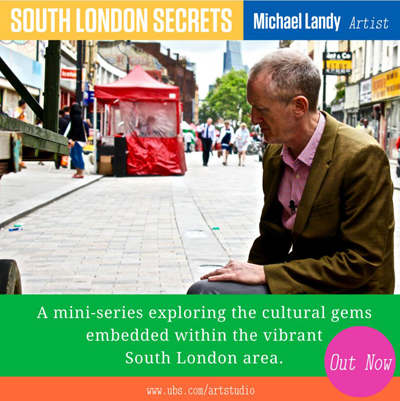 In short arts documentaries called the "South London Secrets" four leading cultural figures were invited to select three highlights from locations around South London to explore and discuss on camera. One of the four movies features Michael Landy and offers a contextualisation of his work, in particular Appropriation, 1990 and Costermonger’s Stall No.4, 1992-1997, by exploring its history and present values.

The series were produced by Cultureshock Media in association with the exhibition "Under the Same Sun: Art from Latin America Today" which has been organised in a collaboration with the "Guggenheim UBS MAP Global Art Initiative".

>> Check out the "South London Secrets" series on BBC Arts