Jean Tinguely’s sculptures invariably have an acoustic dimension that the artist deliberately calibrated and composed as an integral part of the work. This musical aspect reached its apogee in the four Méta-Harmonies created between 1978 and 1985. The exhibition “Music Machines / Machine Music” will give visitors their first ever opportunity to experience all four of these monumental sound sculptures from Karuizawa (Japan), Vienna and Basel live and in dialogue with each other under one roof. The Méta-Harmonies will also set the stage for performances by contemporary artists who experiment with the acoustic dimension. The interdisciplinary programme of concerts, artistic interventions, workshops and events that the Museum Tinguely will be hosting between 19 October 2016 and 22 January 2017 will enable visitors to turn their visit to the museum into a multi-sensory experience in several ways at once. The series is to kick off with an installation especially for the show by the Swiss artist Zimoun, creator of the 11-metre-long, minimalist-looking, filigree wall installation 275 prepared dc-motors, filler wire 1.0mm, 2009/2010. Among the other Tinguely’s Méta-Harmonies‘ Guests will be Julian Sartorius, the Basel ensemble Phoenix, Barry Altschul 3dom Factor, the Museum for Music Automatons, Ensemble ö!, Bianca Hildenbrand, Eliza Coolidge and Timothy Severo, Thom Luz and others. 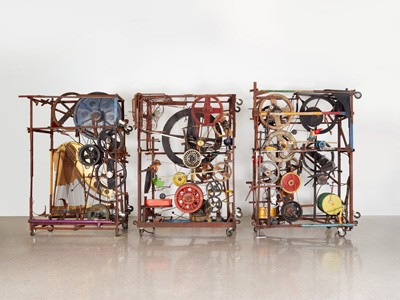 It clanks and bangs and creaks and squeaks and sometimes even a tone sequence can be heard above the racket. The four machines that Jean Tinguely called Méta-Harmonies make a chaotic, clamorous din that sounds anything but composed. ‘My contraptions do not make music,’ wrote Tinguely, ‘my contraptions use sounds and I play with those sounds; I sometimes build sound-mixing machines to mix sounds and then let the sounds go, give them their freedom.’ To the artist, therefore, not only did the sounds made by his machines run counter to conventional notions of harmonious music, but it was never his intention to create New Music in any case. Sound became rather the material out of which he created works of art. While the Méta-Harmonies of the late 1970s are first and foremost machines made with and out of musical instruments, the titles given to the works of the 1980s, in which the term ‘Méta-Harmonie’ becomes no more than an explanatory appendage, make it clear that Tinguely was increasingly aiming for a visual-acoustic spectacle in which the two aspects, the seen and the heard, would interact both with each other and with the third factor of motion.

Tinguely unveiled his first Méta-Harmonie at the Hammer Exhibition in Basel in 1978. Pieced together out of numerous different musical instruments, everyday objects and the large wheels that would become a hallmark of his late works, this one is also the most melodious of the four. Tinguely installed its many different components inside a tall rectangular iron frame and made the conductor of this motley ensemble controlled chance – in other words a product of the mechanism itself. For his 1979 exhibition at the Städel in Frankfurt am Main, the artist had no choice but to build a second Méta Harmonie, however, the first edition having in the meantime been purchased and taken to Vienna by the collectors Peter and Irene Ludwig. 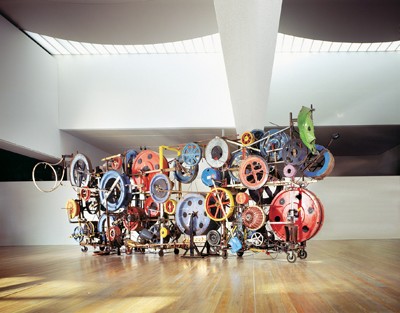 This new Méta-Harmonie II of 1979 is very similar to its predecessor and features many of the same elements: a piano, a melodica and above all lots of percussion instruments. Being a lot more densely packed, however, it is partially convoluted, even if the triptych-like layout remains clearly recognisable. Five years later, Tinguely returned to the same theme for a show at the Seibu department store in Tokyo. The result was Pandämonium No. 1 – Méta-Harmonie 3 (1984). Alongside numerous drums, cymbals, the obligatory cowbells and various other percussion instruments, Pandämonium also features two animal skulls that grind their teeth, lending the work a rather morbid character. The artist’s preoccupation with death and hell is also clearly apparent in this ‘place of all demons’ even if his handling of the gloomy subject matter –  his ‘burlesquisation’ of death, as he called it – is relentlessly upbeat. His third ‘sound-mixing machine’ is not only more detailed and less orderly, but it also stabs and thrusts in several different directions at once, its iron frame being unable to contain the baroque superfluity within. The fourth and largest Méta-Harmonie, called Fatamorgana, like the third is first and foremost a percussive “Méta-Harmonie”. With its large, brightly coloured wheels, the mechanism is much more a focus of attention – at least visually – than in the previous versions. Tinguely and his assistant Josef Imhof (Sepi) built it in a disused factory premises in Olten in Switzerland, where they came across several decommissioned wooden models previously used by Von Roll AG. Tinguely took the larger of these for use in the huge mechanism, which is why Méta-Harmonie IV is also slower, more cumbersome and duller in sound than the others. The noise it makes is the mechanical noise of a gigantic colossus of a machine. 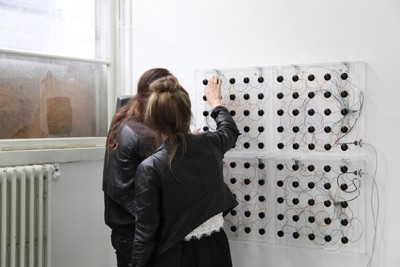 Throughout the exhibition, the Méta-Harmonies will double as a stage set for performances by contemporary artists who experiment with the acoustic dimension. The various concerts, artistic interventions and other events held at the Museum Tinguely between 19 October and 22 January 2017 will give visitors a chance to turn their visit to the museum into a multi-sensory experience – which is what Jean Tinguely claimed of his artworks.

The Bernese artist Zimoun (b. 1977), for example, has created an 11-metre-long wall sculpture consisting of 275 prepared dc-motors, filler wire 1.0mm, 2009 / 2010, which from 19 to 30 October 2016 will fill the room with rhythmically vibrating noises. Meanwhile, the interactive music machine with a hundred different noises in its repertoire called Things You Do Seldom by Bianca Hildenbrand, Eliza Coolidge, and Timothy Severo of New York is the outcome of a multimedia installation and performance based on a piece by the composer Jürg Frey. The hundred recordings required as raw material for it were generated with the aid of sound sculptures made of everyday objects and materials (20.12.2016–06.01.2017).

A lavishly illustrated catalogue in German and English containing contributions by Annja Müller-Alsbach, Sandra Beate Reimann and Heidy Zimmerman, as well as a preface by Roland Wetzel is to be published by Kerber Verlag. It will be available both at the Museum shop and online: 48 CHF, ISBN: 978-3-9524392-5-8