Ben Vautier. Is everything art?

Ben Vautier (*1935) has been on the scene since the late 1950s as an artist, performer, organizer, linguistic inventor, and re-thinker of art. He was one of the pioneers of the Fluxus movement in Europe and, as a comrade-in-arms of the École de Nice, a close friend of artists such as Arman, Yves Klein and Martial Raysse. He is known for his text images, which, using brief, pithy phrases, equally question and challenge life and art. Museum Tinguely dedicates Ben Vautier’s first comprehensive retrospective in Switzerland. Alongside an overview of the first 20 years of his creativity, Ben sets up in Basel more than 30 rooms as he comments on various social, artistic, and political topics and takes a stance. In total, the show exhibits from 21 October 2015 through 22 January 2016 far in excess of 500 works by the artist, who is still very active to this day.
Museum Tinguely is showing Ben’s artistic universe comprehensively in Switzerland for the first time. The franco-Swiss artist, living in Nice and known mostly as Ben, signs everything (“Je signe tout”) – and in doing so comments, with his images and actions, on the world as a whole. “Art is useless” (“L’art est inutile”), “I’m the most important” (“Je suis le plus important”) – Ben Vautier has quite deliberately confused and provoked with such and similar statements for almost sixty years, but, just as frequently, he also thereby prompts reflection. For, inherent in every oh-so-brief phrase is an enormous construct concerning essential questions about truth in art, the role of the artist in society, and the relationship between art and life. His linguistic images deal with a broad spectrum, from self-reflection as artist, through postmodern art theories, to ethnology and religion. They are a portrayal of his personal confrontation with these topics and testify to a critical mind which is not afraid to question everything and everyone – his own ego included. 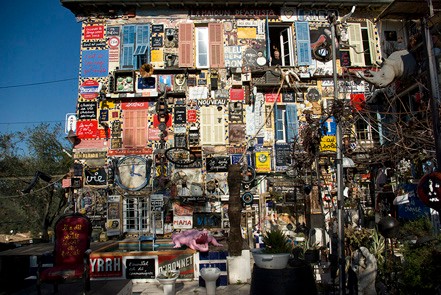 In its interleaving of visual art, philosophy, and everyday life, Ben’s oeuvre is unique. Starting from Duchamp’s readymades, Ben consistently pursued the assumption that a work of art does not reveal itself by its physical nature but only by its signature. Ben’s textual images, most of them written in cursive script, may certainly be considered to be an essential feature of his art and, thus, his signature gesture.
Ben was one of the first artists in Europe to bring art directly onto the street. From 1959 onward he expanded the hitherto common concept of art with his so-called “actions de rue”. These included everyday gestures, such as, for instance, waiting at a bus stop or even oddball acts, too, such as swimming across the harbor at Nice complete with hat and clothes. In the 1960s Ben became, with his numerous actions, a significant figure in the Fluxus movement in Europe. A selection of his performances – he calls them simply “gestes” – are presented at Museum Tinguely with quadratic, monochrome painted and collaged picture panels, as well as on the basis of historical original film material.
A central work in the exhibition is Ben’s “Magasin” (1958 – 1973), the second-hand record store he ran at the time in Nice. During the 1960s this location became the art scene’s main meeting place and simultaneously the venue for numerous actions and exhibitions. The store layout with its numerous handwritten announcements and objects also involved developing the very textual images for which Ben is famous today. This installation, which he continued to develop, was purchased in 1975 along with its original façade and interieur by Centre Pompidou and shown at the opening exhibition of the museum in Paris.

This extraordinary Gesamtkunstwerk, or synthesis of the arts, bridges the gap to his earliest works and combines his artistic leitmotifs into a whole that characterize his work to this day.
The first part of the exhibition, curated by Andres Pardey, directs its focus onto the beginnings and shows selected key works from 1958 to 1978. The opening is formed by testimonies to Ben’s search for his very own abstract language of forms until the first group of text images (“vieilles écritures”). Along the way it becomes comprehensible how Ben turns away from purely formal experiments and, from now on, steers most of his attention toward content and meaning. The full spectrum of his artistic repertoire is on show: via the numerous street actions from the 1960s onward and the high points of Fluxus in Nice, through to Ben as art philosopher and theorist. All this plays out within a short timespan and forms the foundation of his subsequent creativity. Ben’s status, his central position on the Nice art scene, for Fluxus in Europe and globally, his widely ramified linkage with artists, philosophers, literati, international politicians and collectors is made exemplarily apparent here. The topics touched on include multi-mediality, which is a matter of course for the Net activist from the very first days with his own website, own web radio and newsletter, or the enormous archive that Ben started on his own work as well as that of his artist friends. The room featuring works of “Introspection” thematizes Ben Vautier’s creative self-examination and questioning of his own artist’s ego. Here, Ben presents himself as an artist who not only possesses a critical eye on the world and the events around him, but is able to place himself as a character that acts under equally close scrutiny. 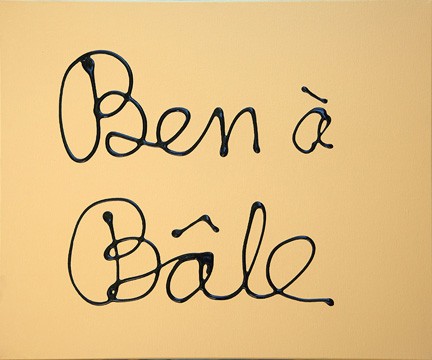 The view from outside inward produces the transition to the second part of the exhibition. This part not only provides insight into the more recent work of Ben Vautier, but also, beyond this, conveys the artist in creative dealing with his own work. The artist designs more than 30 rooms and themes himself and arranges them into a Universe of Ben. From his “little ideas”, to “new text images”, “mirrors”, “photography” through to themes such as “time”, “death”, and a “homage to Tinguely”, Ben presents a Universe of his current works and oeuvre.

Publication
Kehrer Verlag is bringing out a lavishly illustrated publication comprising current texts by Ben Vautier, Margriet Schavemaker, Andres Pardey, Roland Wetzel, and Alice Wilke and many historical texts by various artists such as Bernhard Blistène, Isidore Isou, and Ad Petersen. There will be a German edition ISBN: 978-3-86828-648-9 and an English edition ISBN: 978-3-86828-649-6, 256 p., book price at the Museum shop or online: 52 CHF.