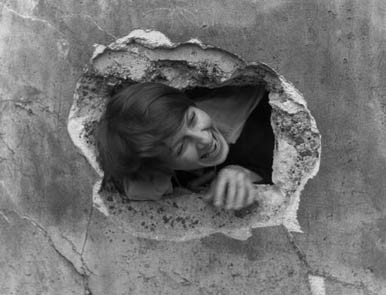 Museum Tinguely, Basel commemorates the artist Eva Aeppli, who passed away on May 4, 2015, with a presentation of works and photos. Aeppli, who grew up in Basel, created from the 1950s an oeuvre that is characterized by great intensity, and in which she traced the depths of the human psyche. Her creations are charcoal drawings, large-format paintings, fabric figures, and bronze heads, along with joint sculptures with Jean Tinguely, with whom she went to Paris in 1952 and to whom she was married until 1961. Aeppli resided from the 1950s onward in France, ultimately in Honfleur (Normandy), where she passed away shortly after her 90th birthday. Museum Tinguely is showing, from June 6 until November 1, 2015, two large-format paintings, a group of fabric figures, nine bronze heads, and numerous photographs by the artist.

Eva Aeppli, born on May 2, 1925 in Zofingen (Switzerland), grew up in Basel with her parents and three siblings. She attended the Steiner School in Basel, which had been co-founded by her father. During the 2nd World War she enrolled in courses at the School of Applied Arts and created her first fabric figures, glove puppets which she sold in various stores. She only commenced her actual artistic oeuvre – she considered the glove puppets her bread-and-butter work – once she was in Paris. 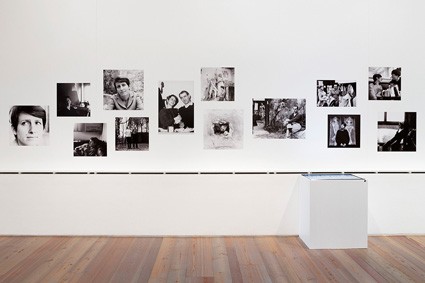 After a first marriage to architect Hans Leu, of which her son Felix-Vital was born in 1946, she was soon the partner of Jean Tinguely. She lived with him in the Burghof, a villa scheduled for demolition which was located at the spot where the extension of Basel’s Kunstmuseum is currently taking place. Their daughter Miriam was born in 1950; Aeppli and Tinguely married the year after. 1949 saw the start of Eva Aeppli’s years-long close friendship with Daniel Spoerri, whom Aeppli and Tinguely followed to Paris in 1952. After an initial period in modest hotels they soon moved into a studio in Impasse Ronsin, an artists’ colony in the Quartier Montparnasse, whose doyen was the Romanian sculptor Constantin Brâncuşi. Here, Eva Aeppli’s oeuvre began with fabric pictures and charcoal drawings, mostly of people, often gaunt figures in gloomy mood.

Aeppli met Yves Klein, François-Xavier and Claude Lalanne, along with protagonists of the very lively Parisian art world such as the gallery owner Iris Clert, the critic Pierre Restany, or the young Swedish art historian Pontus Hultén. However, for the most part she kept her distance from the art scene, while her husband fully immersed himself in it. In 1955 she met Niki de Saint Phalle and the latter’s husband Harry Matthews; the two couples were subsequently bound by a close friendship.

In 1960 Aeppli separated from Tinguely, who lived in the ensuing years with Niki de Saint Phalle, and went on to marry American lawyer Samuel Mercer, with whom she lived part-time in Omaha/NE.

In the subsequent years, Eva Aeppli’s second block of works appeared: Large-format paintings, oil on canvas, in which large numbers of heads are usually depicted. They are, on the one hand, death’s heads, skulls, and, on the other, stylized faces; sometimes still more skeleton parts are visible, sometimes the heads are adorned with flowers. The images are called Le Fleuve (River), Minuit (Midnight), La Fête (The Fest) or Champ des Tulipes (Tulip Field); they are reminiscent of morbid depictions of the dead, of photographs of piles of corpses, of war and concentration camps.

The mid-1960s saw the creation of the first textile sculptures, life-sized figures with impressive faces and long, thin hands. La Table of 1967 (now at Moderna Museet Stockholm) shows 13 figures, sitting at a table, an interpretation of the Last Supper, without a Savior, though. On a smaller scale and darker is the group of likewise 13 figures bearing the title Hommage à Amnesty International (now at the Centre Georges Pompidou, Musée National d'Art Moderne, Paris), black-clad forms whose faces are petrified in silent suffering. Furthermore, Eva Aeppli created individual figures which, sitting on chairs, function as silent watchers of the world. An intensive confrontation with astrology, which began from 1975 in collaboration with astro-psychoanalyst Jacques Berthon and artist Eric Leraille, led to the creation of various groups of figures, the first of which was the Die zehn Planeten (The Ten Planets), which were shown in 1976 at the Biennale in Venice. After the Biennale the artist decided to have the heads of the Planets cast in bronze. She gifted the hands to friends; the figures’ bodies were destroyed. 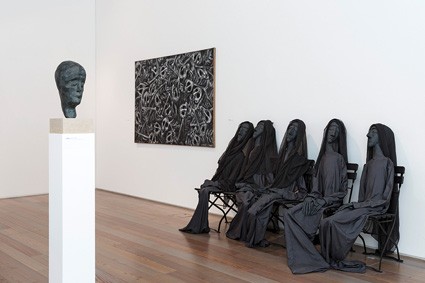 The subsequent period saw the creation of further groups of heads in fine fabric, which were cast in bronze, Astrologische Aspekte (Astrological Aspects), Die zwölf Sternzeichen (The Twelve Signs of the Zodiac), Einige menschliche Schwächen (Some Human Weaknesses), and a number of others. These are heads whose physiognomies record deeply felt emotions. Despite her reclusiveness, exhibition makers recognized the intensity and quality of her oeuvre and organized major retrospectives: in 1993 the Moderna Museet in Stockholm, Pontus Hultén in 1994 at the Bundeskunsthalle in Bonn, André Kamber in the same year at Kunstmuseum Solothurn.

A final group of works was created in 1990 and 1991: these are sculptures that she created jointly with Jean Tinguely, morbid figures such as the Hommage à Käthe Kollwitz (Kunstmuseum Solothurn) or Erika (private collection). These sculptures were on show at Basel’s Galerie Littmann and were central components of the subsequent retrospectives. Eva Aeppli collaborated with other artists, too, such as Jean-Pierre Raynaud or Daniel Spoerri.
In 2006 Museum Tinguely exhibited Les Livres de Vie (The Books of Life), 15 volumes which Eva Aeppli created from 1954 onward and in which she glued everything that seemed important to her. These are invitations to exhibitions, photos of friends, letters, tickets, drawings, little notes, and large documents of all kinds, including draft wills. Les Livres de Vie form a golden thread through an artist’s life that was otherwise characterized by constant change. Eva Aeppli had donated the books to Kunstmuseum Solothurn in 2002. All of the artist’s bronze heads were also on show at Museum Tinguely in 2008, donated to the Museum by her brother Christoph. The last major exhibition was organized for Eva Aeppli by her friend Daniel Spoerri, at his exhibition venue in Hadersdorf in Lower Austria. This marked the completion of a circle that told of a lifelong friendship.
Supported by a more recent – but no less close – friendship, the electronic directory of Eva Aeppli’s works is produced by art historian Susanne Gyger in collaboration with the Swiss Institute for Art Research (SIK-ISEA). It has been published on the latter’s website since 2012 and is publicly accessible.