A joint exhibition of the Paul Sacher Foundation and the Museum Tinguely.

This interdisciplinary exhibition at the Museum Tinguely will be devoted to the multi-faceted subject of creative adaptation in 20th-century music and contemporary art. From 28 February to 13 May it will present music manuscripts and art works that adopt, recast, paraphrase or even dismantle existing works in their content, structure or conception.

The exhibition comprises two segments. Its main focus on music is divided into four sections on non-authorial arrangements, authorial arrangements, borrowings from folk music, and popular adaptations. This unique show will present 180 music manuscripts, letters, photographs, sound recordings, films and instruments from thirty-two collections preserved at the Paul Sacher Foundation, one of the most renowned research centres for music of the 20th and 21st centuries. The exhibits on display stem from composers such as Igor Stravinsky, Anton Webern, Edgard Varèse, Pierre Boulez, Luciano Berio, György Ligeti, Sofia Gubaidulina, Wolfgang Rihm, Heinz Holliger and Steve Reich. They illustrate the various aspects of creative borrowing, providing characteristic and attractive examples from key figures in the history of music, from Bach to the Beatles, and from Debussy to Disney. The variety of items on display and audio-visual documents available on a tablet convey a vivid picture of artistic adaptations in music since 1900.

Cover of the LP record From Walt Disney’s Fantasia,

The art-historical prologue to the exhibition will turn the spotlight on Marcel Duchamp’s iconic notion of the readymade, which since the 1960s has made waves as never before. At issue here is the question of how Duchamp’s concept has been appropriated as an artistic strategy and how it has served as a catalyst for new works. Alongside pieces by John Baldessari, Marcel Duchamp, Hans Haacke, Sherrie Levine, and Jean Tinguely, the exhibition will also feature positions by the contemporary artists Saâdane Afif, Pierre Bismuth, and Bethan Huws.

The exhibition was curated by Annja Müller-Alsbach (art), Heidy Zimmermann and Simon Obert (music) and has been set up in an intensive collaboration with the Paul Sacher Foundation.

‘Strangely different’ – Composers in dialogue with other composers

In music, as in the other arts, the study of historical models has for centuries formed part of the training through which composers learn their craft. In most cases, this involves learning from the ‘ancients’ in order to be able to do things differently, or even to improve on them. In the 20th century, too, composers frequently turned to printed compositions by their predecessors in order to study or rework them, whether they were masterpieces of music history or insider tips awaiting discovery. To quote Mauricio Kagel’s trenchant quip, ‘It may be that not every musician believes in God, but they all believe in Bach.’ RE-SET presents not only tributes, but also critical responses to Bach by Anton Webern, Igor Stravinsky, György Kurtág, Sofia Gubaidulina, and Kagel himself. In their search for new sonic universes, composers sometimes direct their gaze as far back as the Middle Ages: Harrison Birtwistle, Salvatore Sciarrino and Heinz Holliger discovered an inspiring soul-mate in Guillaume de Machaut, for example. Others were stimulated by the notorious wife-killer Carlo Gesualdo and RE-SET will demonstrate how his bold harmonic vocal writing was enlarged upon by Igor Stravinsky, Peter Eötvös, Sciarrino, and Klaus Huber. Orchestral arrangements of Arnold Schoenberg’s piano miniatures reveal how both apprentice and seasoned composers apply instrumental colours. Finally, a splendid example of a friendly turn between composers is Claude Debussy’s orchestration of Erik Satie’s Gymnopédies.

Definite scope for development – The potential of self-borrowing

There is a common notion that composers write one work after another, each of which is complete and self-contained; but a closer look at the process of musical creation reveals that this is not always the case, least of all in the 20th century. Composers have frequently returned to their own works, and for a wide variety of reasons. Some want to improve an earlier work in accordance with new ideas, as did Anton Webern and Edgard Varèse. One of the most active self-arrangers was Igor Stravinsky, as can be seen in The Firebird, 1910. First he created several suites for concert performance from the original ballet score; then he extracted sections from it and reworked them into bravura pieces for the violin; and finally, in 1929, he recorded a piano version of the piece so that it could be punched onto paper rolls and played on player pianos. Other composers, such as Bruno Maderna and Mauricio Kagel, took sections from earlier works and inserted them into new ones like building blocks. Finally, an unequivocally modern creative principle has emerged in the notion of the work in progress: sometimes ideas can gnaw at composers over and over again, ‘fermenting’ in their minds and informing a large number of works in different ways. Examples of this can be found in the works of Pierre Boulez, György Ligeti, and Wolfgang Rihm.

Folk music has served composers as a source of inspiration for centuries. But in the 20th century, traditional music attained a new and greater importance as it was scrutinised by ethnomusicologists and captured on gramophone recordings. Composers discovered that folk music offered authentic, even fresh material for Modernist compositions. One of the first such composers, Béla Bartók, collected folk melodies in south-eastern Europe, not only out of scholarly interest, but also for use as the basis of his own compositions. Following in his footsteps was Sándor Veress, who emigrated to Switzerland in 1949; he, too, carried out extensive fieldwork and arranged numerous folk songs. Others turned to published collections of folk music, as did the Polish composer Witold Lutosławski in his popular Concerto for Orchestra, and Darius Milhaud and Stefan Wolpe, who discovered their roots in the songs of Eastern European Jews. After the Second World War, and even more so since the 1960s, the range has expanded far beyond Europe. Luciano Berio, in his folk songs, outlined what might be called a musical tour of the world, while Steve Reich studied African percussion in Ghana, an experience that led to his legendary cult composition Drumming. Fictitious folk music, ironically detached from banal ‘Swiss Ländler‘ and intermingled with experimental sonorities, formed the basis of Heinz Holliger’s Alb-Cher, a ‘piece for ghosts and alpinists’ written for the Spillit ensemble from the Haute Valais after a legend from that part of Switzerland.

Twentieth-century composers have drawn on jazz and popular music less often than on bygone compositions or folk music. One important reason for this restraint may well be their antithetical structural principles. Whereas much 20th-century classical music dispenses with functional tonality and rhythmic regularity, these two structural features are formative in popular music. And if the musical avant-garde, especially after 1945, espoused an aesthetic of textural discontinuity, popular music clings to the basic strata of melody and accompaniment. Nonetheless, arrangements and adaptations of popular music have cropped up time and again, often producing important and highly surprising examples such as Dmitri Shostakovich’s orchestration of the Tin Pan Alley song Tea for Two, Conlon Nancarrow’s use of boogie-woogie patterns, and Louis Andriessen’s and Luciano Berio’s stylistic parodies of Beatles songs. Nor should it be forgotten that music has often been arranged for use in other media, particularly in film scores. The adaptation of Igor Stravinsky’s Le Sacre du printemps and György Ligeti’s Atmosphères as soundtracks led to their being disseminated and popularised far more widely than they could ever have as ‘mere’ ballet or concert music. 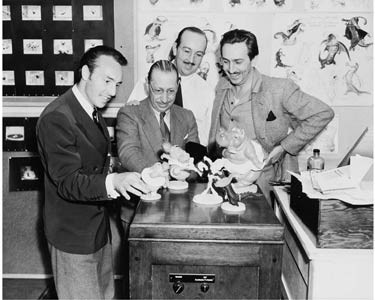 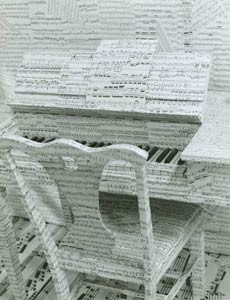 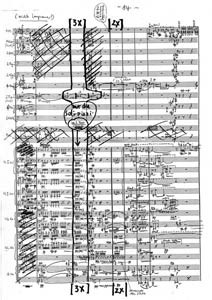 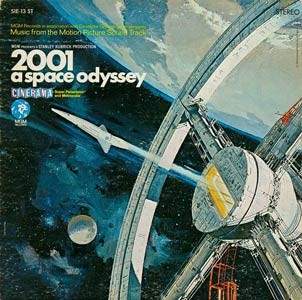 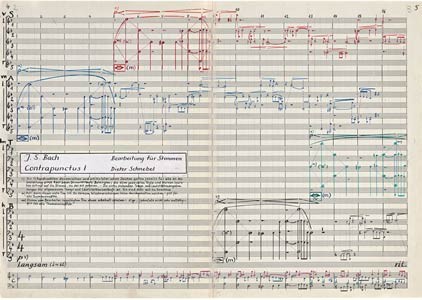 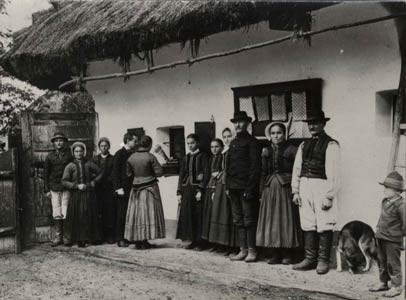 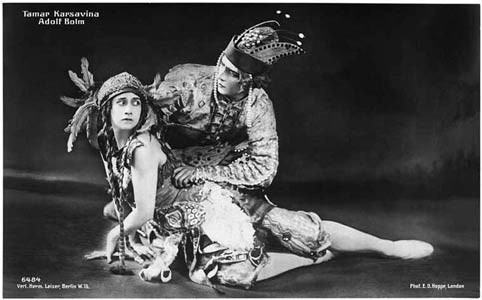 Tamara Karsavina and Adolph Bolm, pcture postcard on the occasion of the Firebird performance, Berlin, 1911 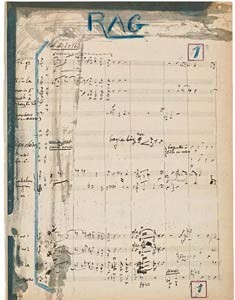 Art history is per se a complex system of borrowings and repetitions of extant motifs and their simultaneous creative reworking and restaging. Art has always been copiable, in principle, yet never before in history has reproducing and reworking the incunabula of art history, to say nothing of everyday images, been as easy as it is today. The art-historical prologue to the exhibition “RE-SET” concentrates on the question of how Marcel Duchamp’s iconic idea of the readymade served as a catalyst for new works. The concept of the readymade as an existing, prefabricated, everyday object that becomes a ‘found readymade sculpture’ solely by virtue of being declared such by the artist, was first formulated by Marcel Duchamp in the early 1910s, initially as no more than a conceptual idea. The concept marked the end of all those traditional parameters that until then had defined what the creation of art actually entails: individual authorship, craftsmanship, uniqueness and with it the notion of the masterpiece, the distinction between original and copy – all these attributes were suddenly up for negotiation. These parameters were especially controversial in the 1960s, when the open work of art was emerging. Numerous artists declared the readymade principle to be the catalyst of their creativity. The concept thus underwent multiple reinterpretations, developed a life of its own, and was eventually equated with the notion of the objet trouvé.

The list of those artists who since then have referenced the readymade concept is very long indeed. Intended as a mind opener, our presentation will confine itself to a small but revealing selection. The exhibition begins with Marcel Duchamp himself, specifically his Boîte-en-valise, a portable miniature museum of his oeuvre, seven series of which were issued between 1941 and 1968. Sherrie Levine’s Fountain (Buddha) of 1996 and Baudrichard’s Ecstasy of 1988, like the works of German artist Hans Haacke, function rather like visual melting pots in which multiple references to the motifs and content of the works of other artists are commingled in order to bring forth something new. In a gesture as simple as it is ironic, Pierre Bismuth in Gucci Traveler’s Folding Item of 2012 alters an existing hermeneutic code and so injects an element of uncertainty into our perception and aesthetic judgment of art.

John Baldessari for his part homes in on the difference between repetition as act and repetition as object in a piece called Repository of 2002. Meanwhile, the interactive incorporation of different sources of inspiration and media serves Saâdane Afif as a catalyst for projects that are often interdisciplinary in approach and developed through lengthy conceptual processes. His Fountain–1917 (A collection), 2018 is being shown in its entirety here in Basel for the first time.
Alongside Bethan Huws’s installation called Forest of 2008/2009, there will be several other recent works by Welsh artist, all of which vividly attest to her intensive engagement with Marcel Duchamp. 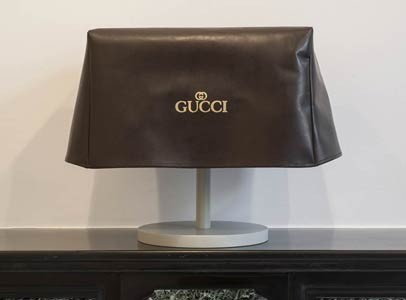 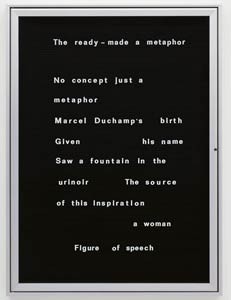 Tinguely had met his favorite among his artist forefathers in person in 1959 at his exhibition "les Méta - Matics de Tinguely: les sculptures qui peignent" at Galerie Iris Clert in Paris, and he met him again in 1960 in New York. An artist who had already integrated mechanics, play, and randomness into his art decades before, Duchamp fascinated Tinguely; a knowledge of his œuvre, as well as his friendship with him, proved to be highly significant for Tinguely's artistic development.

Concerts during the exhibition at Museum Tinguely: